Stephen provides walking, talking heroes of the Faith from history, speaking in his special monologues. Not only does Stephen now bring to his Carolina Study Center ministry his gifts of writing, preaching and teaching, but also his dramatic one-man shows of these heroes. Audiences of all ages thrill to his appearances as Christopher Columbus, Nicholas of Myra, the Apostle Paul from prison, the Prophet Joel, Williams Bradford and others. Let us introduce you to some of these characters available to your meetings on campus, church, or other public or private appearances. 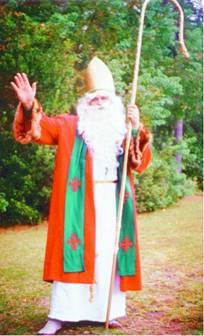 While this character may appear familiar, he comes from far away in time, and half way around the world. His name is Nicholas and he is the pastor of God’s people in Myra, Turkey, His is a story of plague, of wealth, of coming late to one’s calling, of persecution, and of triumph. But most of all it is a story of Jesus and the real man behind the legend of Santa Claus. 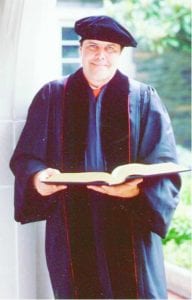 On July 6, 1415, Prague preacher John Hus was led to the stake to be burned as an heretic. Hus was condemned for preaching the Gospel, for calling for a return to the biblical faith, and for seeking the cleansing of a corrupt priesthood. The Council of Constance, meeting on the Swiss border, stripped him of his priestly vestments; a sooty chain was fastened around his neck; and, just before the execution flames burned him, he made a pun of his last name–“Hus,” which means “goose”–saying, “Today you are roasting a lean goose, but hardly 100 years will have passed and from these ashes shall rise a swan who will preach the gospel more fairly than I. And no net of yours will snare him, no trap capture him.” Hus died singing. Just to the northwest of Prague, exactly 102 years later, Martin Luther began the Protestant Reformation. This is his testimony to Jesus Christ.

Willa Cather wrote, “The history of every country begins in the heart of a man or woman.” And in a very real sense, the United States of America began in the heart of William Bradford of Austerfield, England. He has been called “the

There are those who have argued Captain John Smith was the first American; however, after years of exploration, he retired to England. Some set forward Virginia Dare, first to be born of the English on American soil, but little is known of her, because she was born in Manteo and part of “the Lost Colony.” Some even clamor for John Winthrop, governor of the Massachusetts Bay Colony, but he only tried to duplicate England in America.

William Bradford was different. No soldier of fortune, he was not an adventurer, who came to American shores to get rich quickly, then take the next boat home to Great Britain. Bradford came to stay. He brought his wife. He planned to trade, to build a town, to establish a covenant way community of Jesus Christ. And stay he did; his colony establishing the pattern for village life that would become the model for hundreds of other towns across North America.

Franklin D. Roosevelt wrote, “Those, who have long enjoyed such privileges as we enjoy, forget in time that men have died to win them.” Such is the case with us, here and now; as with William Bradford, then and there. That is why William Bradford, “The First American,” returns today, in seasons of Thanksgiving, to speak, to remind us, to call us back to the neglected path. 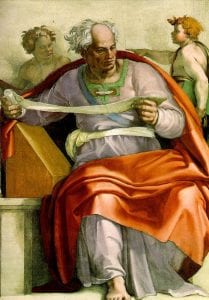 The Minor Prophets comprise the last ten books of the Old Testament. They have strange sounding names, like Obadiah, Nahum, Habakkuk, and Zephaniah. Some were tall, others short. Some had a sense of humor. Others were blunt and offensive. Some of these prophets were educated. Others were quite rustic. In short, there was a voice, a personality, etc. to connect with every hearer. God was not leaving anyone out.

These men are called Minor Prophets, not because they are unimportant, but because their written messages are brief. They minced no words.

Joel was the second minor prophet. In Hebrew his name means “The Lord is God.” He appeared in Israel in the fifth century B.C. As Joel returns to speak to us, give ear, my friends! Give ear!

Saint Patrick in the Morning! 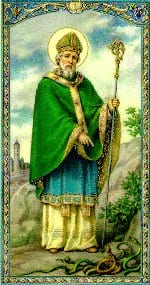 At one time nearly 100 years ago the nation of Ireland suffered a severe potato blight. Famine killed hundreds of thousands of people. And many millions of Irishmen immigrated to the United States. These colorful people brought with them Saint Patrick’s Day, March 17.

Who is this Patrick? When did he live? What was his life? With a little Irish music to set the mood, you too can hear St. Patrick speak to tell his own story. 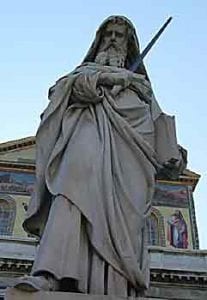 His name is Saul, which means “loaned” in Hebrew. He was named after an earlier Saul, the first king of Israel. While King Saul was tall physically, our Saul is short. At his baptism someone nicknamed him “Paul,” which is Latin for “shorty.” Though he is short physically, he stands tall spiritually.

From Tarsus, a port city in present day southeastern Turkey, Paul was Jewish and a maker of tents and sails. On the Damascus Road Jesus met him in a blinding conversion, and Paul was never the same.

In this presentation we meet Paul in prison. After three effective mission journeys Paul was arrested under false accusations by Jewish and Roman authorities and confined to a jail cell, where he languished for several years.

He refers to himself as “an ambassador in chains” as he busies himself writing letters, encouraging his visitors and talking to his guards about Jesus Christ. 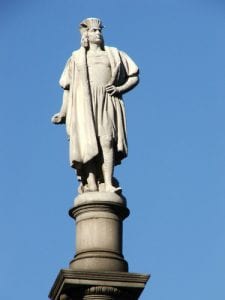 Five hundred years ago a man dreamed of reaching the east by sailing west. He sought trade, honor, and souls for Jesus Christ. His name is Christopher Columbus and this is his own story. 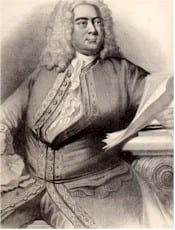 For over 250 years the name George Frederick Handel has been synonymous with music.

What not many know is that he was a lifelong single man, who was prone to depression, and who struggled with a career filled with ups and downs.

He was also a Christian. A lifelong Lutheran, he was the only musical Reformer to work with all three branches of the church: Catholic, Protestant, and the English Reformation. He was also a prolific composer, writing single-handedly almost as much music as Beethoven and Bach combined.

Organ music, opera, symphonic suites, and oratorio–he wrote music for every occasion. Once an admirer said to Mr. Handel after a concert, “Well, Maestro, you certainly entertained people tonight!” to which Handel replied, “I don’t wish to entertain them. I wish to make them better!” Indeed, in Christ, he did just that.

This dramatic monologue by Stephen Crotts is Handel’s story in his own words and music.